You want a white smile that dazzles, but all you see in the mirror is a row of yellow, stained teeth.
It’s easy to reach for a whitening kit at the drugstore, but think twice before you spend your money. Most conventional whitening systems are unpredictable, frustrating, and even painful.
The KoR Whitening system offers a unique and innovative solution that stands apart from the rest. This continuously refrigerated, high-potency gel is combined with a scientifically designed application system to deliver incredible results.
After all, you only get one smile!

What is the KoR Whitening System?

If you’ve ever purchased whitening strips or gels from a drug store, you know that these products promise dramatic results and ease-of-use, but in reality only deliver a complicated application process with unpredictable results. KoR Whitening sets itself apart from standard whitening systems by targeting stains with full, uncompromised potency.

Your smile looks discolored because stain molecules have become trapped within the microstructures of your teeth. As they become larger and absorb more chromophores, the stains become darker and harder to remove.

Normal peroxide formulas whiten your teeth by lightening the color of these stains with “bleaching factors”. However, since the formulas used in most conventional whitening products aren’t fully potent, they can’t efficiently diffuse through the entire microstructures of your teeth to target the worst stains.

According to research from Clinical Research Associates (CRA), standard whitening gels applied in trays only stay active for 25-35 minutes before becoming too diluted by saliva. You can’t achieve optimal whitening results in just half an hour!

That’s how KoR makes such a difference. KoR gels are continuously refrigerated from the moment they’re formulated until the second they’re applied to your teeth. Continuous refrigeration ensures that Kor gels are never compromised or degraded by heat or bacteria.

Even better, the high potency formulas are never diluted or weakened by saliva. They’re applied in KoR-Seal trays specifically designed to seal out saliva and sulcular fluid. This creates 6 to 10 hours of whitening activity compared to just 25-35 minutes with other systems!

The KoR Whitening system offers multiple protocols and gels to meet your unique smile goals. Whether you’re getting ready for your wedding, graduation, or simply giving yourself the gift of a more confident smile, there’s a KoR protocol for you.

KoR Home offers an at-home whitening system for day or nighttime use. This is the most flexible and affordable way to whiten your teeth with KoR. To use KoR-Night, simply apply the 16% carbamide peroxide gel every night for at least two weeks. If you can’t wear whitening trays while you sleep or have extreme sensitivity that prevents overnight use, KoR-Day provides a gentle alternative to use once or twice a day for at least two weeks.

Depending on your level of discoloration, it’s best to visit your dentist for the KoR Max, KoR Ultra, or KoR Ultra-T in-office whitening treatment. Here’s what you need to know about each!

The best selling system thanks to its versatility and high success rate.

KoR Ultra is designed for severe staining that exceeds normal discoloration, such as cases of fluorosis and dark geriatric staining.

Tetracycline staining offers a unique challenge to whitening. In fact, most whitening systems cannot treat tetracycline stains or consider them impossible to reverse. Not KoR! You can achieve truly exceptional results using the KoR Ultra-T treatment.

KoR is the first whitening brand to refrigerate its entire line of teeth whitening gels. This makes a huge difference for the chemical quality of KoR formulas.

All whitening gels are unstable by nature; they must be unstable in order to quickly release oxygen, oxygen ions, and radicals when placed in the mouth. It’s how peroxide action removes stains!

However, that chemical instability makes gels more vulnerable to degradation at room temperature and above. All unrefrigerated whitening gels slowly become weak and compromised while in warehouse storage, transportation, and sitting on store shelves. This means that you could potentially purchase a whitening gel that was exposed to 95-degree heat in the back of a truck during transport. You’d unknowingly spend your time and money using a product without any whitening power left!

Thanks to KoR’s constant refrigeration, your whitening gel is guaranteed to remain nearly 100% effective.

Will KoR Make My Teeth Sensitive?

Temporary tooth sensitivity is a common side effect of teeth whitening since the peroxide chemicals must enter through the microstructures of the teeth and remove molecules of discoloration. KoR addresses this sensitivity issue with KoR Desensitizer.

The desensitizer plugs the orifices of the dentinal tubules during whitening. This doesn’t just mask the symptoms of sensitivity, it prevents it altogether.

How Long Do KoR Results Last?

Your KoR Whitening results can last permanently with periodic at-home maintenance! Since KoR gels remove existing stains and revitalize your teeth to help them absorb bleaching factors in the future, you can maintain a dazzling level of whiteness even as you drink your favorite coffee, wine, or tea.

How to Find KoR Whitening Near You

A beautiful, white smile really is within your reach! Get the help and support you need from a dentist who specializes in KoR Whitening and understands its unique benefits.

Dr. Gregory Skeens and his team at Encinitas Family Dentistry are devoted to enhancing your naturally beautiful smiling using state-of-the-art technology. Call to make your appointment today and receive the cosmetic care you deserve.

The Highest Standards of Care

Make Your Appointment With Us Today!

Welcome to the Encinitas dental office of Gregory Skeens, JR., DDS. We are your home for caring dental treatment that supports superior oral health and helps you achieve the beautiful smile you’ve always wanted. Our modern facility is equipped with cutting-edge technology and our team is here to make your visit enjoyable and relaxing.

We take a truly individualized approach to dentistry, which is why our practice is so popular. After every treatment, Encinitas dentist Dr. Skeens personally makes follow- up phone calls to patients to ensure that they are feeling well. Your comfort and well-being are of ultimate importance. 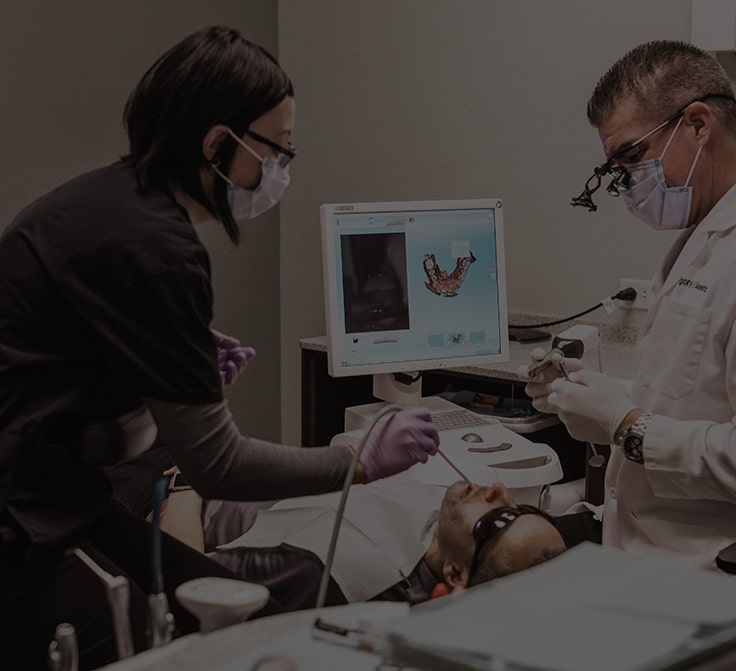